Information on a Roman Fort, discovered just over a year ago in Calstock, is to be unveiled next week, as part of the Calstock Parish Heritage Project, which draws to a close later this month. The project was supported through a grant of £35,500 from the Heritage Lottery Fund (HLF).

The archaeological dig which revealed the Roman fort and many exciting finds, was a major part of the two-year project to encourage the local community to find out more about their history and heritage, within the Tamar Valley Area of Outstanding Natural Beauty. It really captured the hearts and imaginations of the Calstock community and beyond, bringing enthusiasm and energy to dig deeper and find out more about the cherished heritage of the local area.

An interpretation board, showing the extent of the fort, highlighting the finds and detailing the explorations, will be publicly unveiled by Dr Chris Smart, University of Exeter, at 10:30am on Saturday 26th January; the meeting place for the unveiling will be the cemetery gates opposite St Andrews Church, Calstock, near to where Calstock Parish Council have generously given permission for the board to be sited.

Richard Bellamy, HLF’s acting Head of South West, said; “The success of the Calstock Parish Heritage Project reinforces the fact that local people are keen to explore and dig deeper into the past to reveal the origins of their present-day communities. Thanks to the enthusiasm and commitment of everyone involved, this project has made real discoveries about the past, enabling future generations to better understand the history of their area.”

An exhibition, celebrating the end of the project and all it has achieved, is on now at the Tamar Valley Centre, Drakewalls. Opening times are 11am – 4pm, and free hot drinks will be available for those who attend the unveiling on 26th January.  For those unable to come along then, there’s plenty of time to view the displays and chat with volunteers. Mon – Fri, 11am – 4pm, until 31st January (special late opening on Friday 25th until 7pm). 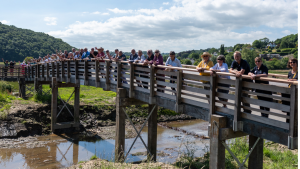