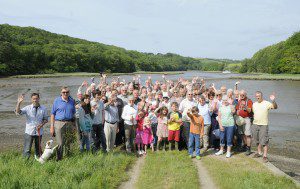 A gem within the Tamar Valley AONB, Wacker Quay provides stunning views and free public access to the River Lynher.

The local community group has made a huge contribution to the idyllic site by working hard to create a scenic and easy connecting route from Antony village to the riverside without using the car!

Wacker Quay is clearly signposted from the main A374 road from Torpoint to Trerulefoot and lies about 2 miles west of Antony village. Car parking is free and you are welcome to walk the trail, which was

Explore Wacker…. download a specially-designed self-guided walk leaflet of the trail from Wacker to Antony, commissioned as part of the ‘Helping Hands for Heritage’ project and illustrated by Ley Roberts of the Limekiln Gallery, Calstock.

Why Wacker Quay is special …. 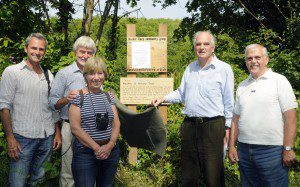 The quay was first established in the mid 19th century as an agricultural dock complete with lime kiln. In 1886, the site changed completely when a military railway was constructed, which ran from the quay, along the river and up a steep incline to the twin forts of Scraesdon and Tregantle, (part of the 19th century fortifications of Plymouth). The quay would have been a very different place then, bustling and noisy, with rows of barges tied up between the two still visible piers ready for unloading.

The 2.5 mile long railway was finished by 1893 but only survived until 1905, largely due to high running costs. The newly cleared walkway takes visitors along the level bed of the railway track to the bottom of the incline. The route then passes other interesting and evocative railway remains such as turntables, an engine house and old sidings. There are plans to remove ivy and moss from these relics and reveal their story with an interpretation board. One of the turntables was cleared by volunteers in 2014 as part of the ‘Helping Hands for Heritage’ project. One curious aspect is that the locomotive, its trucks and engine shed had all been relocated from the Sudan where they had been used in the military campaign there after the fall of Khartoum in 1885.

Still owned by the MOD, the quay is used to train new recruits to HMS Raleigh. Since the 1970s, it has been managed by Cornwall Council as a car park and picnic site, but, in recent years, it had become rather run down. The site, together with the railway line and the pathway to Antony Village, has now been leased by the Tamar Community Trust. An enthusiastic local community group now manages the site and have transformed it through their hard work and dedication.

Wacker Quay is also a popular winter bird-watching site. Many shore birds, including waders and duck, come to the Lynher to over-winter and can be seen on the extensive mudflats that are easily visible from the quay. If you are lucky you may see little egrets and spoonbills too. The river here is also a good place to see passage birds on migration in spring and autumn as they stop to refuel on their long journeys.

Finally, the river and its many secret side creeks are perfect to explore by canoe or kayak providing one carefully plans around the small tidal window.